The Chainsmokers: “Side Effects” 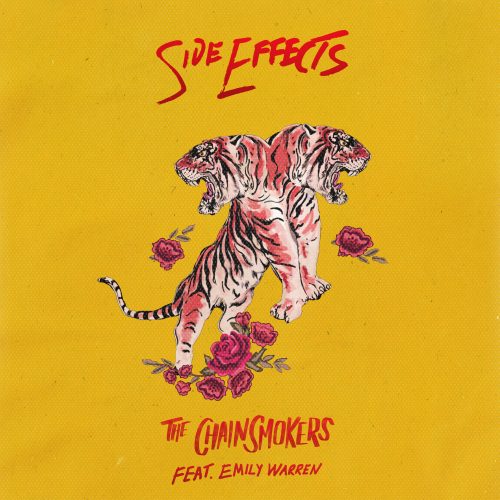 Grammy Award-winning artist/producer duo, The Chainsmokers, have released their new single “Side Effects” today via Disruptor Records / Columbia Records. The track, featuring vocals from longtime collaborator Emily Warren, is available everywhere HERE. Check out the lyric video HERE. Fans can expect the official music video, which will feature a special cameo from a recognizable actress, to drop in the coming weeks.

Of the new single, the duo says, “We are proud to bring you our new song, ‘Side Effects,’ featuring our dear friend and frequent collaborator Emily Warren. We felt it was time for a summer jam rooted in the sound we created when we first started making records. Our music is always a current reflection of how we feel, what inspires, and who we are in that particular moment. Enjoy!”

“Side Effects” is the latest release from The Chainsmokers following a string of singles this year including “Somebody,” “Sick Boy,” “You Owe Me” and “Everybody Hates Me.” Together, the five tracks represent the latest chapter in The Chainsmokers’ ongoing building album, entitled Sick Boy.

The Chainsmokers are set to perform “Side Effects” along with their other major hits on Good Morning America’s annual Summer Concert Series live from Central Park on August 10 on ABC. The duo are also set to perform “Sick Boy” for WE Day California, which will air August 17 on ABC at 8pm ET / 7pm CT. WE Day is a series of inspiring events that celebrate young people taking action on pressing social issues.

Fans can catch Alex and Drew as they continue touring across the globe throughout the remainder of 2018. For a full list of shows, visit http://www.thechainsmokers.com/shows.