ATOP BILLBOARD 200 FOR NEW SOLO RELEASE

WHITE TO PERFORM ON SNL ON APRIL 14 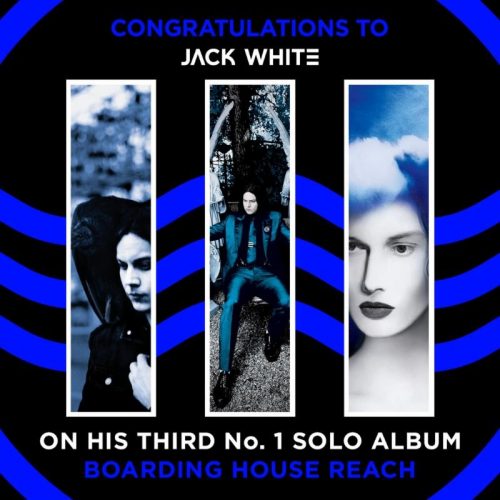 BOARDING HOUSE REACH (Third Man/Columbia), the acclaimed third solo album from Jack White, has debuted at #1 on this week’s Billboard 200 — his third consecutive chart-topping debut for a new solo release – and has the biggest sales week for a rock album in 2018, and second overall. The album also sits on top of the vinyl charts and is the #1 best selling rock album and alternative album. It’s the fourth-largest sales week for a vinyl album since Nielsen began tracking sales in 1991.

B BOARDING HOUSE REACH – which showcases new tracks including  “Over and Over and Over,” “Connected By Love,” “Respect Commander,” “Corporation” and “Ice Station Zebra” – has swiftly accrued critical applause from around the world:

Jack White has created something wild, mysterious and unlike anything else around. Bravo, Jack…

The old Jack is still there, certainly, but we’re far more excited about

what the new one has up his sleeves.”

“BOARDING HOUSE REACH is easily one of the most layered and compelling releases of 2018, which furthers White’s legacy as one of the few remaining mavericks in music.”