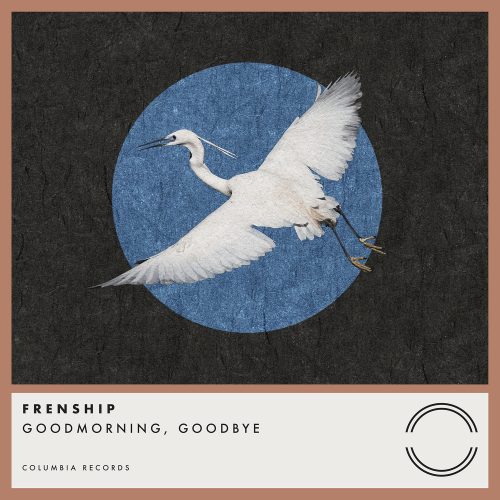 “GOODMORNING, Goodbye” follows the release of the duo’s single “LOVE Somebody” last month. The song has 5 Million+ streams to date and was praised by Wonderland Magazine as “a completely dreamy and emotive track,” while Idolator called it an “instantly-catchy banger.” The band is bringing both new tracks and more straight to the fans on the road this summer.

FRENSHIP’s 36-date North American Good Morning, Goodbye headline tour kicks off next week in Kansas City, MO on April 3 and concludes in Denver, CO on May 24. Brett and James are also set to bring their in-demand live show to the Bonnaroo Music & Arts Festival stage this summer. The band has drawn rave reviews opening for British indie band Bastille on their European and U.S. treks last year, establishing themselves as a deserving headlining act. Yoke Lore will support on all dates. See full list of dates below. For tickets, please visit www.weareFRENSHIP.com.

The duo first emerged with their 2016 mega-hit “Capsize” ft. Emily Warren, which they then followed with the acclaimed EP Truce and stand-out single “1000 Nights.” The viral impact of the infectious “Capsize” marked it as a rare difference-maker in the world of hybrid pop. The song has totaled over half a billion streams, scoring at Top 40 radio and notching multiple gold and platinum certifications around the world.  FRENSHIP also earned the #2 Breakout Artist nod for 2016 on Spotify and a Shazam 2017 Emerging Artist tout, with the group becoming an in-demand breakthrough act at concerts and festivals around the globe, including Lollapalooza Chicago, Outside Lands Music Festival, Life Is Beautiful and others. 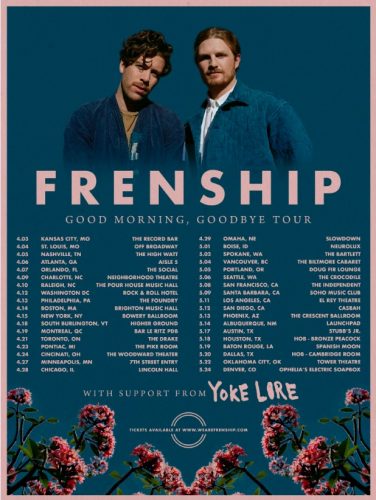